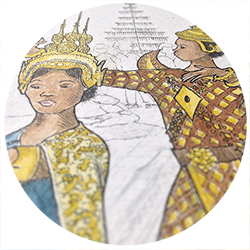 The roll of the French Institute of Cambodia contains some trade secrets that are to be discovered here :

The translation of the Khmer text, written in the Mekong at the very beginning of the roll from French Institute, is here :

“Living cultures means understanding the importance of dialogue between different human expressions. It is through the sharing of one’s own representations of the world and in respect of its differences that one educates oneself and becomes part of the future. The French Institute of Cambodia is one of those places of exchange, debate and cross-fertilization where cultures meet and are enriched by the contribution and understanding of the other.”

The leaves that fly away each have a Khmer letter. Together, they compose a slogan :

The numbers correspond to 5 quotations :

1. “I am almost never serious and I am always too serious, too sensitive, too cold. I am like a collection of paradoxes” – Saussure
2. “How to learn to change glasses”
3. “If you can’t find shoes on your foot, walk barefoot.”
4.”If you have a library and a garden, you have everything you need” – Cicero
5. “If in doubt, go to the library” – JK Rowling

When it comes to drawing an “idea” (here a slogan), there is a long research phase at the beginning. In 2010 Sophiline Cheam Shapiro, a choreographer, dancer, singer and educator who has influenced many new ideas in Cambodian classical dance create a show called “The Life of the Giants”. The originality of one of the characters rests in the position, the headdress as well as the costume created especially for the performance.

So I started drawing this character thinking I was doing the right thing, but as it was an “original creation”, I had to find an alternative to replace it with a character in a more “classic” costume. So there is, on my original roll, the atypical character created by Sophiline Cheam Shapiro. But on the mainstream version, we see a classic ogre.

The Songlines by Bruce Chatwin

The Ants by Bernard Weber

The war of intelligence by Laurent Alexandre

The Use of the World by Nicolas Bouvier

The Best of the World by Aldous Huxley

Periodical of the Journal des voyages

The Fables of the Jean de la Fontaine

Collection The books of which you are the hero

The mystery of Jostein Gaarder’s patience

The art of telling the story of Matthias Debureaux’s travels

…well, yes! I had still thought a little bit about that scroll! (ahah!) 😉

Sign up for the NEWSLETTER for exclusive news and offers